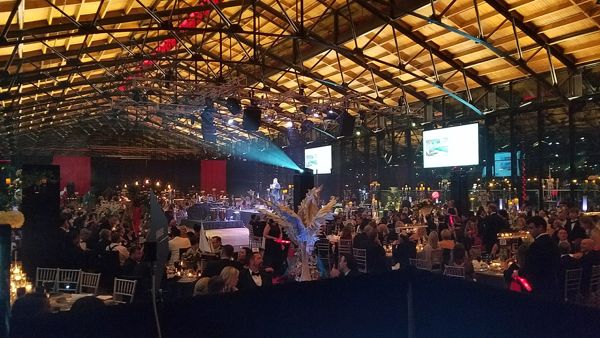 The American Heart Association (AHA) is one of the most well-known research charities among a field filled with good people doing important work. Around the country, the AHA offices host a signature fundraiser known as the Heart Ball. Here in Richmond, this event has set the standard for gala dinners with amazing catering, creative entertainment, and wildly successful fundraising efforts. This year, the Heart Ball had the additional distinction of being the first event in Richmond’s new signature event space, the remodeled Main Street Station.

Originally opened in 1901, Main Street Station has been an essential part of Richmond’s skyline with its distinctive clock tower. The massive train shed was one of the first examples of large riveted steel construction, and today remains among the largest steel buildings in the country. Over the last century, the building has seen duty as a train station, a shopping mall, and as city offices. Today it still serves as the downtown area’s Amtrak station and will become a central transportation hub with the addition of bike, bus, ride-sharing, and other transit services.

The largest space – the 50,000-square foot train shed and its indoor platforms – have been renovated for use as a beautiful and flexible venue able to hosts thousands of people for dinners, concerts, and other special events. 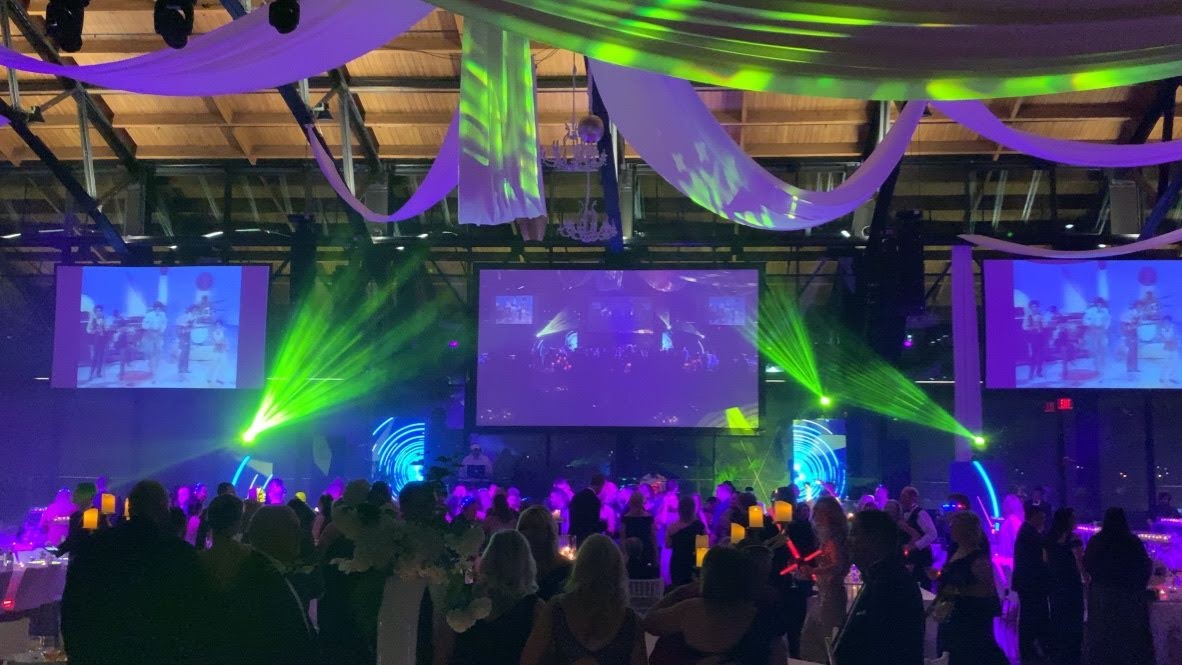 We were brought in to the project by our friends at Mosaic Catering and Events, who tasked us with providing sound, video, rigging, and multimedia design for the Heart Ball. The event was held in three ‘acts’ with guests progressing through the length of Main Street Station from the opening registration area to a pre-event cocktail reception and finally to the seated dinner and auction program. The space itself has some challenges, and this event was made four times more complex by being hosted in the round – requiring audio and video coverage in all four directions around two centrally-located stages.

It was important to the planners that our home host city of Richmond be prominently featured, so we created a 3’x5’ replica of the city logo custom cut from foam, onto which we mapped projected content. From dining to shopping to our vibrant riverfront sporting scene, this multimedia showcase highlighted great features of our city and welcomed guests as they entered the registration area.

After checking in, guests enjoyed cocktails and hors d’oeuvres from Mosaic while a local jazz band provided entertainment from an elevated stage. This structure included 360-degree sound coverage and four 70” screens thanking sponsors for their contributions throughout the year. We used a small iPad-controlled mixer and in-ear monitors for musicians, so the stage was kept as clear as possible.

Finally, guests were welcomed to the main event space with a grand reveal and upbeat music from the DJ. This final room received the bulk of our attention, as this would be the centerpiece of the event with welcoming remarks, fundraising auction, and live entertainment all taking place on the main stage.

With Main Street Station under construction, we had to design an overhead rig that could support the required systems while being suspended from the limited number of rigging points installed at the time.

In the ‘long’ directions of the approximately 100’x250’ main event space, we deployed small hangs of Nexo Geo S12 speakers to cover the seated audience, with hangs of JBL VRX to fill the side seating areas and twin dance floors. Around the audience area, six 9’x16’ projection systems ensured every seat had a clear view of auction items, mission videos, and camera feeds from the stage. One of our Tricaster switching systems managed video switching and playback, and audio was mixed on a Midas M32. Fiber optic video cabling and digital audio snakes gave us flexibility in signal routing through this large venue.

The Heart Ball is annually one of the best tickets in town, so it was a perfect fit as the inaugural event in the city’s new space. We were proud to be selected as the audio-visual provider for this event and hope to make this a yearly project, just as we look forward to many other successful events at Main Street Station. 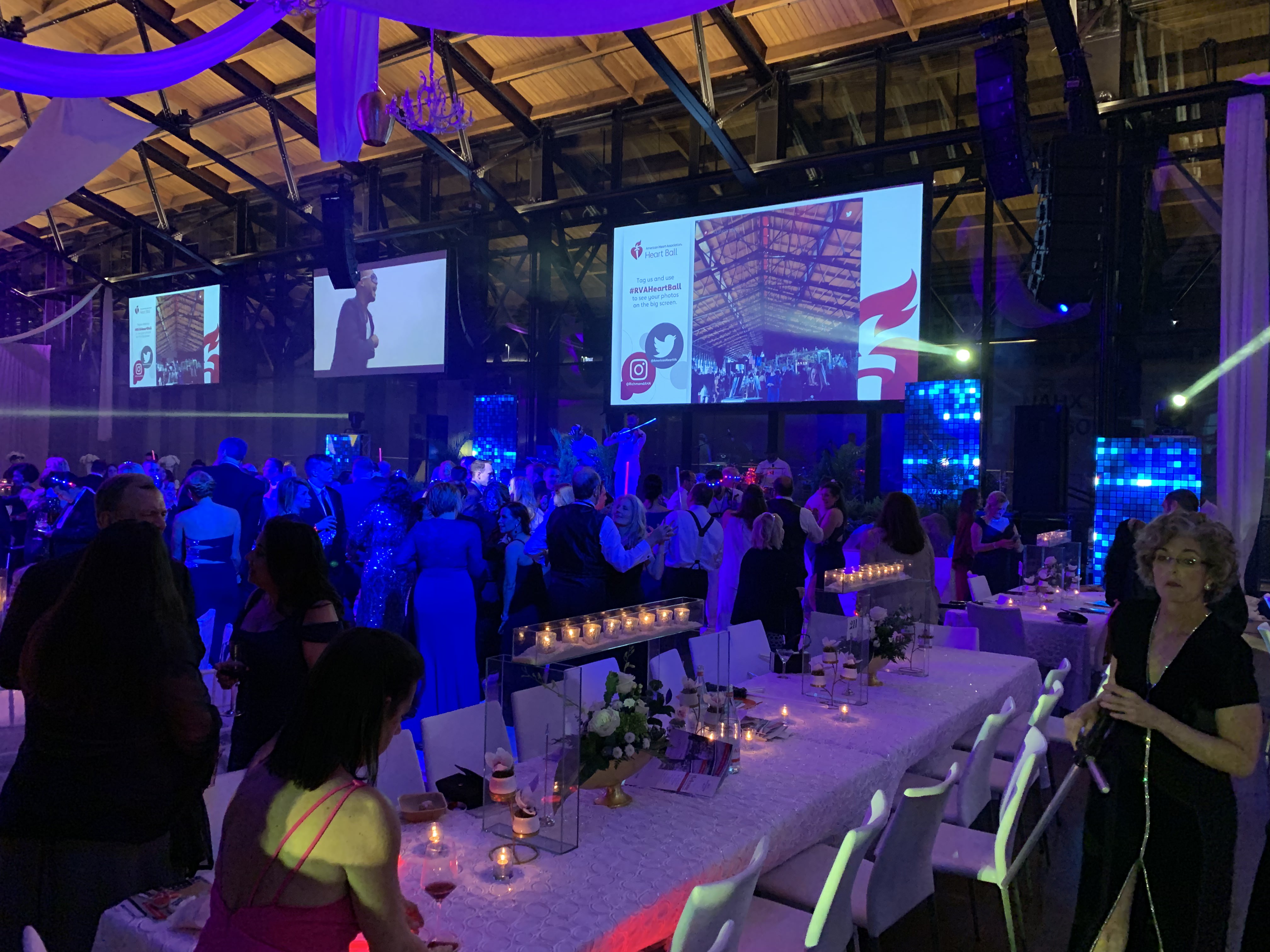