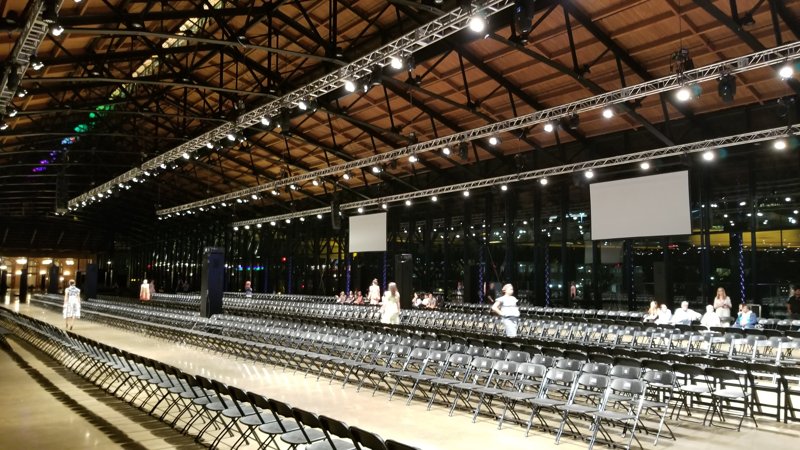 The Fashion Design and Merchandising department at VCU is one of the nation’s best, drawing students from around the world to its major programs. The work of these students is showcased annually in their signature end-of-year runway fashion show – this year titled “Momentum.”

Advanced Visual Production has supported this show for several years in its previous venue, providing multi-camera web streaming to a global audience. This year, however, the show grew five-fold in its size and scope: a move from an intimate venue with a 50’ runway to Main Street Station’s train shed allowed for enough space for 540’ of catwalk snaking through the audience of 1,500 guests. As part of this move, AVP was tapped to provide all of the technology support for the event.

With such a large and discerning audience, care was taken to provide the best sound, lighting, and video systems to allow for an excellent experience for each guest. Our designers began work months in advance, layout out audio and video coverage for the large crowd, while also considering the needs of the significant online viewership. While the Station provides a lot of flexibility in terms of its overhead rigging opportunities, careful calculations were needed to ensure the safety of our systems when suspended from the historic overhead structure. The renderings produced as part of this design process were also great tools for promoting the event.

A single-day load in presented a tight schedule, with 800’ of truss to bolt, 32 motors to hang, 144 lighting fixtures to focus, and four hangs of line array to tune. Our crews executed the plan with speed and skill – no small feat given each stick of truss must be carried upstairs by hand – completing the setup in time to allow the students to set 1500 chairs and hold an evening rehearsal.

With systems in place, chairs are set in advance of rehearsal.

Audiences arrived to a transformed Station, anticipating a runway show that would be the largest – measured in runway length – ever hosted in the city of Richmond. Models took to the runway to present the fashion design work as a house DJ kept the show moving. With no audience member deeper than a second-row seat and multiple cameras presenting close ups on screens and to the online audience, every attendee had a great seat from which to appreciate the designs.

Great views from every seat in the house as models take to the runway. Photos by Alan Jones.

In all, four truckloads of equipment were set by 20 staff members putting in approximately 600 man-hours of work over a 55 hour period. We’ve condensed the entire process in to a 6 minute timelapse – from empty floor to packed show and back to empty floor.

For another view of this process, check out this 360 degree VR, show by our friends at 360Virginia: